In the largest calculation of its type, Max Planck astronomers and their colleagues within an international consortium have used a T3E supercomputer to study how the matter in a large fraction of the whole observable Universe evolved into the complex web of walls and filaments discovered in recent galaxy maps.

Observations indicate galaxies are distributed in a filament-dominated web-like structure. Numerical experiments at high and low redshift of viable structure formation theories also show filament-dominance. The web is largely defined by the position and primordial tidal fields of rare events in the medium, with the strongest filaments between nearby clusters whose tidal tensors are nearly aligned. 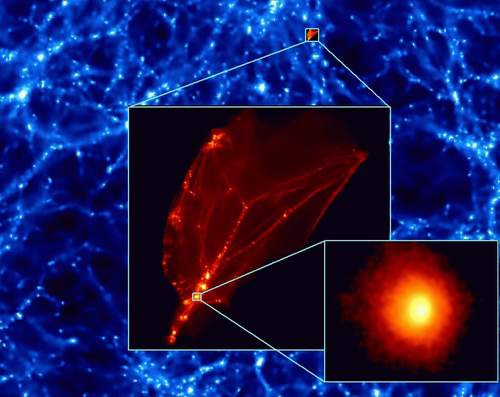 This is our universe as it appear after the largest computer simulation, every point in this picture is a galaxy! Each galaxy contain more than hundred billion stars!! We can only say: Subhana Allah.

The filamentary distribution of galaxies connecting galactic clusters are formed by the dynamic evolution of correlation bridges between the galaxies. Clusters that are at a distance less than the mean cluster separation distance have strong correlation bridges. Numerical simulations show that the web of filaments that describes the final state of the galaxies occurs even in the initial density fluctuations. The pattern of the cosmic web is dependent on the rare density peaks in the initial fluctuations. Superclusters of galaxies are cluster-cluster bridges linked by the filaments.

The amazing thing the Holy Quran has mentioned this discovery 1400 years ago! Allah The Almighty said: "By the sky with its fabrics" [51/7]. The old explanation of this verse was: "By the sky with its pathes" because they did not understand the word "fabric" i.e "Al-Hobok". So we can today understand this verse well. The word "Al-Hobok" means "fabrics" and we can see this cosmic web clearly.