Many studies confirm that our solar system is distinguished from any other system and that our solar system is stable. A group of Spanish astronomers had found some evidences that there are some stars like sun which swallow the revolving planets  in its orbit , a group of scientists in the Astrophysics institute in canary island had found a star called "HD 82943" , that star is emitting some gases such as isotopes lithium 6 which doesn't exist in the external layers of stars that are similar to the sun because these gases vanish in the early stages of the process of stars evolution.  Scientists published that research in "Nature" the British scientific journal.

The scientific team confirms that the only explanation behind these gases is that the star swallowed one or two groups of its planets , this star looks like sun and it is 78 light years far from earth .

Also, the possible explanation is that these stars possess a huge power of gravity to enable it to swallow these planets, and on the other hand these stars may push these planets away from its system. Till now number of discovered systems out of our solar system is more than fifty systems.

Astronomers don't know if that phenomenon is due to a small problem because of the new technology which is able to observe these strange systems or it is a rare event. Studies refer to a large number of stars which are surrounded by a trash of some cosmic elements. The study showed that there is another 450 star which are similar to the sun and these stars contain the Iron in the surrounding Molecules or on its surface which is an indication that these star swallowed many cosmic Molecules. 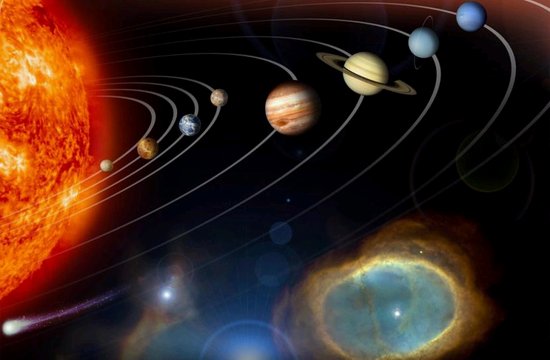 A picture which represent our solar system: the sun in the center and around it there are the revolving planets which revolves in precision without accidents or mistakes. Scientists are astonished from this precision as that is the opposite of all other systems which are disturbed and not stable.  They say: what makes our solar system calm and work in a great precision? That is Almighty Allah who says :( It is not for the sun to overtake the moon, nor does the night outstrip the day. They all float, each in an orbit.) (Sûrat Yâ-Sîn- verse 40)

A moment of scrutiny

God shows us that scene to be a signal to his mercy because he saves us on earth as He created the magnetic field of earth to protect the earth from the sun. God says :( Is not He (better than your gods) who has made the earth as a fixed abode, and has placed rivers in its midst, and has placed firm mountains therein, and has set a barrier between the two seas (of salt and sweet water)? Is there any ilâh (God) with Allah? Nay, but most of them know not!)(Sûrat An-Naml- verse 61). at this verse , God tells us about one of his graces as He made earth is suitable for life and put it in the right orbit around the sun .Therefore if the sun is near to us than that , all creatures would be burned and if it is far from earth more than that all creatures will die because of the cold.

God gave us another grace which is the stability of our solar system on the opposite of the other systems as every thing is in precision without collision. God says: (It is not for the sun to overtake the moon, nor does the night outstrip the day. They all float, each in an orbit.)(Sûrat Yâ-Sîn- verse 40) also God tells us about a great grace that is the sky surrounds and keeps us. God says :( And we have made the heaven a roof, safe and well guarded. Yet they turn away from its signs (i.e. sun, moon, winds, clouds, etc.).)(Sûrat Al-Anbiyâ- verse 32)

These scientific discoveries should motivate us to remember the grace of our God be He exalted and blessed. as the existence of these verses is a proof that this book was descended from Almighty God , and if prophet Mohamed (peace be up on him ) is the author of Qur&#39an , so he wouldn't speak about some cosmic rules(It is not for the sun to overtake the moon)or the grace of the stability of earth(Is not He (better than your gods) Who has made the earth as a fixed abode,) or the grace of the magnetic field(And We have made the heaven a roof, safe and well guarded.). These verses are such proofs that who said it is Allah be He blessed and exalted